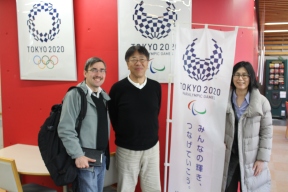 I wanted to visit Japan for a number of years as I had very good friends whom I met originally in 2012 at the social work conference in Stockholm and wanted to learn from them about social work in the country of raising sun.

Thanks to ANA airlines I was able to accomplish my dream and even fly in business class to both Australia and Japan during my winter grading retreat. Because of the very cheap flight (thanks to the ANA error) I was able to buy Japan Rail Pass and explore the country from Sapporo to Kagoshima by train.

I want to thank Dr. Mai Yamaguchi and her family as well as Social Work faculty of Japan Lutheran College for sharing with me information about social work education in Tokyo, Dr. Minori Utsunomiya for the tour of Nagoya and explaining the Mental Health Social Work in Japan,  Yuichi Shinada for a tour of Tokyo Medical University Hospital and the role of social worker in health care system of Japan, and Professor Shin Yamada for a visit to Hiroshima Peace Memorial and detailed explanation about Burakumin discrimination and social security law in Japan. I am extremely grateful for such a wonderful welcome in Japan and definitely will be back as there is so much to learn.

Here is the list of 65 social work programs I mapped during my visit:

Japanese Society for Study of Social Welfare website suggests that “Formal social welfare/work education in Japan originally developed as a field of higher education after the 1920s. The Japanese educational system was reformed after World War II and a modern higher educational system was established. The Japan Association of Schools of Social Work was founded as a voluntary organization in 1955 by 17 schools. In response to the aging society, the Certified Social Worker and Certified Care Worker Act became effective in 1987 and the Association became larger and larger. As of March 2010, it included 148 four-year universities, 13 two-year colleges, and 8 vocational schools. Other organizations, such as the Japanese Association of Schools of Certified Social Worker included 271 member schools. As for the output of all these education courses, there were 134,000 certified social workers in 2010”.

Another aarticlethat provides the history of social work profession in Japan is written by Ito, F. (2011). The Rise and fall of professional social work in Japan: Evolution, devolution and neo-liberal turn?. Journal of culture in our time, 123, 5-25 and is fully available online

I will keep updating this post with new information on social work / social welfare in Japan.

By Sasha in Social Work Around The World on May 20, 2018.
← Social Work Education in Australia Contemporary Social Policy Concerns in Canada: Social Work Responses. →